I’m trying to keep up with the blog here, but the beginning of Spring/Summer hiking season in the North East has got me on the trail so much and running around taking pictures that I’m neglecting the site a little. So here’s to playing catch up….

Thursday, May 16th and Friday, May 17th I hiked 37 miles on the Appalachian trail from Monson, Maine, south to Caratunk, Maine. I am trying to knock off the Maine section of the AT and have a short section from Caratunk to Flagstaff Lake, and the famed ‘hundred mile wilderness’, which isn’t really all wilderness any longer. I had originally planned on a three day hike, but at the end of my second day, I only had 5 miles to go, so I dumped in the H2O and calories and finished in two.

On Thursday morning I dropped my truck off at the AT parking lot just north of Caratunk village on route 201. My wonderful Mom shuttled me to the AT crossing on route 15 between Monson and Greenville at around 7:30AM. I normally hike the AT South to North, but as the easiest portion of this section is on the North end, I decided to reverse direction.

Heading South from route 15 the trail was a little muddy and wet, but I expect that in the early season. The individual maintaining this section of the trail had already been through, clearing blow downs and digging out tranches to release some of the water. Nice to see the maintainers out early. Trail maintenance is all volunteer based and some don’t get out until later as the through hikers wont be through for a bit.

As I came upon Lake Hebron outside of Monson, I stepped over an inlet and was startled by six or eight 14-16″ fish in the stream! They were barely submerged! Upon closer inspection I identified them as spawning suckers. Really cool to see them sloshing up and down stream! You can access the AT close to this area by following Pleasant Street out of Monson. This is probably the best route for through hikers to take if looking for some real food or to grab a package pick up in Monson.

The trail deteriorated somewhat after this, but was only because the number of blow downs in the trail increased. The maintainer for this section had not been out yet. Not really a problem, but made the walking a little more difficult. The first major obstacle was reached next…. the East branch of the Piscataquis river. Water levels were average right now as we hadn’t had much spring rain and the snow melt was gone a while ago. This ford was calf deep and COLD, but it made my feet feel great! 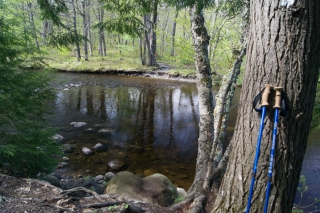 I rested on the West side of the stream and the black flies descended! As long as I was moving I was fine, but stop and I was getting chewed! I grabbed a Cliff bar and headed out along the West branch of the Piscataquis and into Horseshoe Canyon. The AT winds above the North edge of the canyon. I think it would be a nice day hike to explore the waterfalls and cascades of the river, but not today. I had to cover some miles to make my evening destination of Moxie Bald lean to. I stopped at the Horseshoe Canyon lean to and grabbed a sandwich for lunch even though the black flies were terrible! 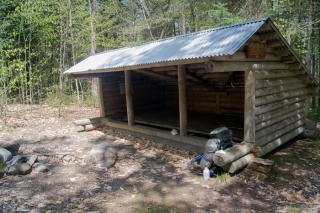 Leaving the lean to, I headed West continuing along the West branch of the Piscataquis to the crossing location. This spot is a much longer crossing and has a rope strung across in case of stability help in high water. Places on this crossing were almost waist deep. I have heard that this can be a difficult crossing in high water. I even remember talking to a through hiker last year that got stuck between the East and West branch for more than a day. He had crossed the East branch heading South during Spring rain and it rose so quickly that he could not get across the West branch when he got there. 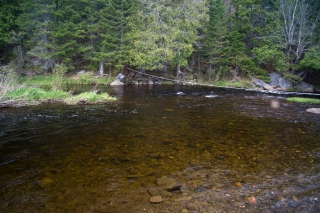 At this crossing, Bald Mountain Stream enters on the West and the trail continues, following the stream closely for a mile or so. I used to maintain the trail from here to the outlet at Bald Mountain Pond and it was a tough section. The maintainer before me had not done a very good job. As a volunteer maintainer, you are required to visit your section a specified amount per year. I think it was two, but not sure what it might be now, as I haven’t been a maintainer for a few years now. Anyhow, the prior maintainer apparently was filling out work sheets detailing work performed, but was not doing the work. Evergreen brush had grown in almost closing off the trail and I spent a couple of years trying to prune everything back. The current maintainer has done a spectacular job in widening out the trail as can be seen here. It is a pleasure walking this section… 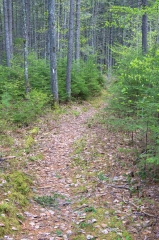 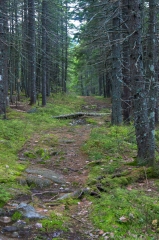 The trail here is very level for about 3 miles or so, but toward Bald Mountain Pond outlet it gets pretty wet in spots. The outlet crossing is at the location of an old dam and was pretty easy to walk across, once again only calf deep. A couple more uneventful miles brought me to the Moxie Bald lean to. 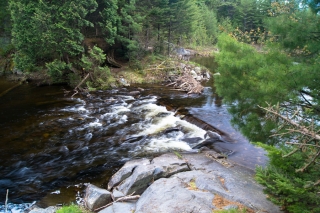 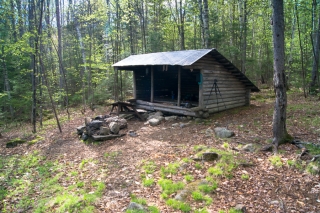 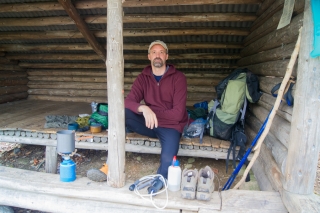 I spent the night here listening to a couple of owls calling back and forth. I brought my 40 degree sleeping bag and it got pretty chilly that night, but with some extra clothes I stayed warm (except for my nose sticking out of the mummy bag). The morning provided a magnificent sunrise over the lake and after breakfast of coffee and instant oatmeal I headed out. 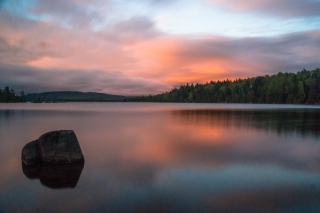 The days hike started out immediately with a pretty good elevation gain up Moxie Bald Mountain. There is a side trail to the top with the main portion of the AT routed over a cutoff path so in bad weather the peak can be avoided. Views were OK given that the conditions were deteriorating and it was pretty nippy up there. Had to put on a fleece and my gloves. Supposedly you can see Katahdin to the North East on a good day…. I may never know.

From the top, the trail winds down into the valley between Moxie Bald and Pleasant Pond Mountain, passing the Bald Mountain Brook lean to along the way. Not long after was the crossing of Baker brook, the inlet to Moxie Pond. This I have heard is the worst of the crossings along this section (four major ones in all). At high water this can be well above the waist and it’s pretty far across. Today I was able to rock hop most of the way. 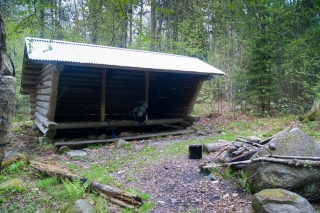 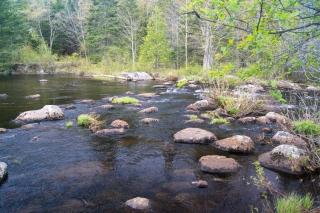 I was able to rest once again after crossing Baker brook. Here the AT follows a dirt road North for a little bit. I saw my first people here. Three guys out to kayak and fish on Moxie Pond. They were here for the same thing as me….. get a little head space away from all other people. Once in the woods again the trail gains elevation steadily for the next couple of miles on the way to the summit of Pleasant Pond Mountain. The views from the top are limited, but you can get 360 degrees if you walk around the ledges a bit. 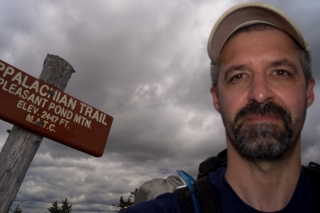 I didn’t stay at the top long as once again it was windy and cold. Continuing on toward my destination for the night, the next mile was a brutal straight shot down to Pleasant Pond. I was apprehensive as I have had knee trouble in the past and it always rears itself on the down hill sections after I am tired and beat up. Surprisingly my knees held up and I felt pretty good when I reached the Pleasant Pond lean to. 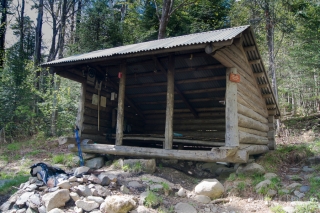 I soaked my feet in the pond, which is accessed from a .2 mile side trail. After putting my boots back on an cleaning up a little, I went back to the shelter. It was only 2:30PM and I only had an easy downhill 5 miles to go. I decided to dump in some water and calories and hike out instead of spending the night. It was Friday and I was running the Sugarloaf 15K road race on Sunday. If I got out tonight I would have 36 hours to recuperate. This section of the trail was very nice, following Holly brook most of the way through a mixture of soft and hard wood forest. Painted trilliums were everywhere… 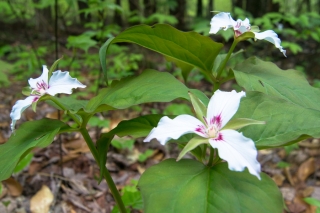 This section of the AT has a few access roads into it that could be used to break up the hike into multiple day hikes that would be great for family outings. I think the most enjoyable would be either a hike into Horseshoe Canyon from Pleasant Street in Monson, or a hike to the summit of Moxie Bald Mountain from the Deadwater road off route 16 outside of Bingham, and the Trestle road in to Baker brook on Moxie pond. Great section of the AT that gets minimal use in the off season. Now I can check this section off and move on to the 100 mile wilderness…..

View AT Monson to Caratunk in a larger map