This past weekend I took a road trip to some of the easily accessible waterfalls in New Hampshire. I began on the Kancamagus Highway (route 112) West from Conway. The first was Lower Falls Recreation Area on the Swift River seven miles from Conway. This is a very popular spot in the warm summer months, but November….. I was all alone at 7:00 AM. This area has some nice, rushing, low falls below the parking area, but it is not especially spectacular. I took some photos and played around with some very long exposures, but when I returned home for post processing, I was not very impressed with anything I had captured. You can see what I was playing around with here. I like the way the sand ripples are very clear with the water not quite so. 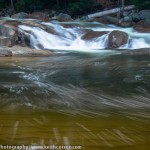 Next stop was Rocky Gorge (Upper Falls). This is also directly road side about 9 miles from Conway. Unlike the Lower Falls, which are more of a river spanning cataract, the Upper Falls narrow and plunge through a narrow gorge. There is also a picturesque foot bridge below the falls. There is an interesting plaque telling the story of a woman who was swept away by the rushing water and presumed drowned. She was found hours later in an air pocket under one of the surging falls. 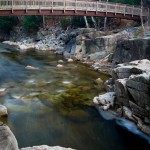 My next stop was Sabbaday Falls 3.4 miles West of Bear Notch Road. (Just after the Bear Notch Road I saw a moose!) There is a picnic area here and the falls are a short 0.3 mile uphill walk. These falls are primarily three drops. The top is a small drop into a beautiful pool carved in the granite. The next is a drop down a small channel in the pool into a 25 foot chasm in the granite ledge. The last drop is 90 degrees from the second and flows into a deep emerald channel. This is a spectacular set of falls and is definitely the highlight of these three Kancamagus waterfall areas. 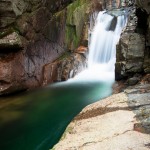 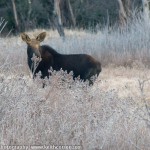 From Sabbaday Picnic Area I drove West to the tourist town of Loncoln and hopped onto I93 North toward the Flume Gorge. This is a bustling location in the warmer months, but once again, I had this place almost to myself. There were two vehicles in the parking lot and I had just a glimpse of four people. It is difficult to navigate in the off season as all the trail signs are taken down and the Visitor Center is closed and gated. I found my way by parking the the last parking lot and walking the paved bike trail to a paved access road branching off to the right. This will take you to the back side of the Visitor Center. From here I walked downhill to a red covered bridge, then across and uphill. Don’t waste time in the off season thinking you will be able to navigate the gorge as they remove the walkways before closing for the year. I attempted to scale the gorge, but was really not a good idea. The rocks were very icy and I couldn’t make it all the way, requiring a back track and I got a bit wet. The better decision is to follow the path on the left flank of the gorge and walk down in from the top. At the top of the gorge is Avalanche Falls, which is a very colorful, vertical drop into the gorge. On my way back to the parking lot I took a right at a junction near the top of the gorge and headed to Liberty Gorge Cascade. There is a very nice upper drop through red granite boulders and I lower drop over ledge. I happened to be here mid day and the sun was out, so not the best lighting opportunity. Continuing on is ‘The Pool’ and the Sentinel Pine Bridge. The Pool is a large, deep, pool in the Pemigewasset River. The bridge was made in 1939 partly from a 175 foot Sentinel Pine that was brought down during a hurricane in 1938. Total mileage for this is approximately 2.1. 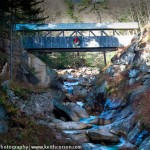 Next stop was the Basin-Cascades Trail just north of The Flume Visitor Center. The parking area is on the right of I93. To get to the Basin and surrounding area you walk through a tunnel under I93. The Basin itself is a large swirling pool worn into the granite of the Pemigewasset River. From The Basin head south past the footbridge to a trail head sign indicating the beginning of the Basin-Cascades Trail. Heading upstream, the cascades begin almost immediately on the left pouring over some long, gradual, ledges. Above these ledges, the brook flows over rocks and boulders for a long ways. At 0.4 miles there is a side trail to the base of Kinsman Falls. A beautiful single drop into a large pool. Further up stream is another trail to the head of the falls. A short distance up stream, the trail fords the brook at the base of a pretty, but insignificant set of falls. There is a sign post close by that indicates it is Rocky Glen, but I’m assuming the sign post just got swept downstream, because Rocky Glen is further up stream. 0.4 miles above the crossing is Rocky Glen Falls. I did not see any signs here, but the falls are obvious. The area was slippery with ice, but with care, there are multiple vantage points to scramble around. 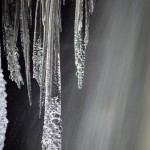 By now it was approaching mid afternoon and the sun was already noticeably lower in the sky. Any mid day warmth was quickly disappearing and any places that the sun didn’t hit were becoming down right chilly. My path back home was a circuitous route north on I93 to Twin Mountain, connecting to rt 302, and heading down Crawford Notch to Glen and back home through Gorham. I wanted to hit a couple of falls close to the road on my way there. I stopped at the parking lot at Crawford Depot, just below the AT Highland Center at the top of Crawford Notch. The plan was to knock off Beecher and Pearl Cascades just behind the Depot. Head across the railroad tracks on the Mt. Willard Trail. At 100 yards follow the Avalon Trail as it branches to the right. The trail crosses Crawford Brook shortly after. Not far upstream from the crossing, the Beecher and Pear Cascades Trail forks to the left, closer to the brook. Both cascades are close by. Not sure why they are considered cascades and not falls as they are both nice drops through colorful granite gorges. At the top of Pearl Cascade either take the trail in the reverse order or connect back onto the Avalon Trail and work your way back to the parking lot. Round trip is less than 1 mile. 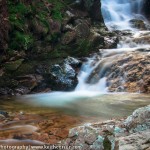 As the sun was fading behind the mountains to the West of the notch, I headed south and stopped by Flume Cascade and Silver Cascade, which are both beside the road in Crawford Notch. They flow over Mt. Jackson on the Eastern edge of the notch, feeding the Saco River. Both have parking areas and are easily accessible. If taking pictures at either of these locations, be aware of the traffic on rt. 302. If you are like me, you tend to focus on the subject you are shooting and forget what is around you. 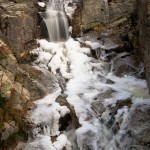 From here it was on to Glen for a beer run at the Glen Beverage Company (a must for beer drinkers :-). Then back home via route 16 to Gorham and route 2 back to good ‘ol Maine. Great day. Great company.