Saturday, January 26 was the night of a full moon and it was rising very close to sunset. Perfect! I had all kinds of ideas for locations to shoot the moon! The original plan was to head north and hike Little Bigelow Mountain from the East Flagstaff Road on the Appalachian trail. About a 6 mile round trip hike in snowshoes. I would be able to get some awesome pix of Sugarloaf and Bigelow with sunset and later that night with the full moon. Since it turned off brutally cold I worked on a backup plan. We would forgo the hike and drive to Eustis on Rt 27 to the North side of Bigelow with a view of the Horns over Flagstaff Lake. Awesome full moon pix to be had there. Well, that plan got waylaid also as my granddaughter became sick and Tammy went to my daughter’s apartment to help out. Plan three??? How about the north side of Mt. Washington from the top of Crawford Notch looking back toward the Mt. Washington Hotel. Plan!

I headed out in the afternoon and decided to stop along Rt 16 in Pinkham Notch on the Southeast side of Mt. Washington to see what Glen Ellis Falls would look like all iced up. The notch was brutally cold and windy, but I made it to the falls with only one other person there also taking pix. I spent the better part of an hour there and came up with this. I am still deciding if I can make it a better composition so it may look different when I am finished. 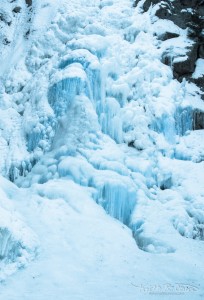 Headed up Crawford Notch on Rt 302 and parked at the viewpoint beside the road looking toward the Mt. Washington Hotel. I waited for sunset and wasn’t expecting much as it was quite overcast. But in the last few minutes before the sun set it shown beneath the clouds and lit the top of the mountains in brilliant pinks and reds! Took a bunch of photos and stitched them together for the panorama below. Unfortunately the mountains became quite cloudy as the moon was rising and I couldn’t see the moon at all. So much for the full moon shots, but hope you enjoy what I did get out of this trip.

Hoping to get to Little Bigelow this weekend, so stay tuned…..