It’s been a couple of weeks since our vacation and I have been weeding through 3,000+ photos in my ‘free’ time. Exhausting work, but enjoyable. Tammy and I spent 3 days in the park. One on the West side at Village Inn at Apgar Village on Lake MacDonald, one on East side at Many Glacier Hotel on Swiftcurrent Lake, and one at Glacier Park Lodge in the Two Medicine Lake area. Both the vistas from our lodging at Village Inn and Many Glacier Hotel were stunning, but I think the nicest facility was the Glacier Park Lodge. There were huge pine tree columns supporting the structure and it was set up such that the open area in the middle of the lodge was like a long, huge, open hall way.

Many Glacier Hotel was very nice and their huckleberry margaritas are killers; believe me, we has many. This hotel closes in the fall and has no access all winter. There is a caretaker that stays to inspect the lodge and make sure no pipes leak/burst and no pests set up residence. Supposedly there is quite a waiting list to be caretaker, but I think it’s a little creepy. ‘The Shining’ anyone?

We relaxed a little the first afternoon at the Lake MacDonald area. We wanted to go into Avalanche Lake, but a fire broke out there on our way and the Rangers were blocking access to the trail. It was disappointing as this also blocked access to the upper portion of Avalanche Falls, which I really wanted to photograph. There was also a mountain lion warning in the area, which Tammy was not fond of. We were able to stroll about the Trail of the Cedars which has the largest cedar trees I have ever seen. Some must have been 8 or 9 feet in diameter.

Next day we were off to the east side of the park going over the 50+ mile Going to the Sun Road. Very nerve racking for the driver (me) as I was pretty white knuckled until I got used to the short, stone, guard rails and the STEEP drops!. I let Tammy take pictures along the road as I was concentrating on driving. We reached Logan Pass (continental divide) early and hiked to Hidden Lake. Very easy to reach and very beautiful. Then back down the mountain passes on the East side of the park and St. Mary Lake. It was so windy here that it was difficult to photograph.

The afternoon consisted of reaching Many Glacier Hotel, finding a parking spot (horrible as the lodging guests share parking with day users), finding the bar, and guzzling a couple of huckleberry margaritas chased with a local brew. Dinner here was fabulous! Early the next AM, we grabbed the boat across Swiftcurrent Lake, walked about 1/10 mile and hopped onto the boat across Lake Josephine. At this point we decided to head for Grinnell Glacier. Much of the group on the boat was heading to Grinnell Lake with the Ranger. Many of the lower elevation trails were closed due to the number of grizzly bear sightings, which made Tammy a little nervous. I really wanted to see one (at a respectable distance), but it didn’t work out as I had hoped. The trail to the glacier was well worth the effort (appx. 7 miles round trip). Beautiful scenery and lots of wildlife. After the trip back to the lodge we were off to Glacier Park Lodge.

The drive to Glacier Park Lodge is very bumpy, winding, and narrow for much of the way. The lodge is gorgeous! We didn’t do much in this area as we were pressed for time, but the next morning we did have time to check out Running Eagle Falls which was unique. We were the only people there at first so we were listening for creatures and making noise at blind corners. I bought bear spray, but didn’t really want to have to use it, contrary to what I kept telling Tammy ;-). The falls flow out of a cave and drop into a beautiful blue and gold pool. At high water (it was low when we were there) the water also comes over the ledges in front of the cave.

As I have time, I will upload more photos here. 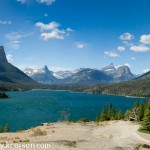 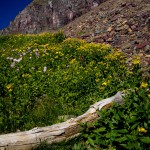 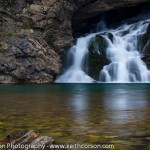 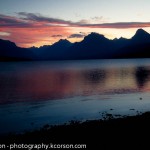 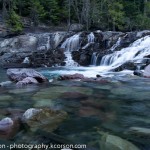 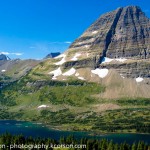 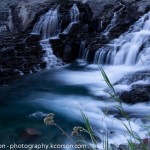