It’s been a few weeks since I last posted. Apologies, but life gets in the way some times. Tammy and I hiked in to Tuckerman’s Ravine on Mt. Washington on Saturday, March 9th. Neither of us had been there before even though we only live about an hour away and I have wanted to tackle the relatively short, easy hike for a few years now.

Since we live in South Paris, ME, we took route 26 to Bethel and route 2 from there to Gorham, NH. In Gorham we took a left onto route 16 South toward Jackson. This road passes right through the Mt. Washington Valley. At around 10.5 miles from Gorham, the AMC Pinkham Notch Visitor Center is on the right. This is the trail head location. Get here early if you want a parking spot!! There is quite a bit of road side parking, but the parking lot and road side fill up early. We arrived at 8:30AM and still had to park a few hundred yards down on the side of the road. If parking is unavailable, there is spillover parking available North at the Wildcat Mountain ski area parking lot, although this will create at least an additional 1/4 mile walk each way.

The wind was blowing early in Pinkham Notch (which it always seems to do) so we bundled up fairly well. I always like to start out on the chilly side as I would rather not have to start stripping layers of clothing 15 minutes into  my hike. Since I have never been into Tuckerman Ravine I had no idea what to expect for trail conditions. I had visualized a narrow, meandering, wooded trail up into the valleys that push up against Mt. Washington. The reality was that the trail is groomed by a trail cat about 10 feet wide for the first 2.5 miles up to the caretaker cabin at Hermit Lake. We had brought our snowshoes, but decided to strap them on our packs and use our spikes instead. The path was steady uphill, but not excruciatingly so. The tiring part was that it was a very warm day, the snow was soft, and it felt like you were constantly walking in sand. It was so warm that I stripped down to a long sleeved t-shirt. We saw one woman skiing up the trail in shorts! I don’t think it was quite that warm :). At about 1/4 mile in, we stopped at the lookout at Crystal Cascade and decided that since the sun was shining directly on it, it might be nice to stop on the way out for some pictures. 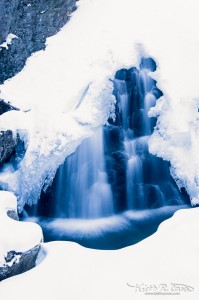 It had snowed a couple of days earlier so we constantly got water on our heads from the snow melting in the trees. Tammy got a full dump of snow on her head from an overhead branch. Unfortunately I didn’t get to see it….. It was interesting seeing all the people heading up to ski, with skins on their skis and the ankles unlatched to they could sort of cross country ski using their downhills. Many people had small sleds attached to their packs to make the trip out quicker and much more exciting! They looked like ZIPFY sleds. You gotta check out their video. Looks like a blast!

Once we reached the caretaker cabin at Hermit Lake (appx. 2.5 miles) the trail narrows to a ‘normal’ New England mountain trail for another .7 mile to the ravine. This part is steep and was slick even with 1″ cleats.

Once at the ravine we pulled off our packs, I set up my camera, and we got down to business….. snacks and drinks. There were a few volunteer safety patrol guys and plenty of skiers/snowboarders. One of the guys we talked to said that it was a 2-2 1/2 hour hike from the base of the ravine to the top and a 5 minute ski down. We relaxed, took pictures, and watched the crazy skiers. Way beyond my skiing comfort level. After hanging in the sun for a couple hours, we headed back down. Great day! Anyone looking for a great winter experience for relatively little effort should definitely think about this one….