Over the long weekend for President’s Day, Tammy and I and our good friend Tawn headed to Millinocket and Baxter State Park to ski into Katahdin Lake Wilderness Camps. I’ve been hiking in Baxter State Park for over 20 years and just discovered this gem last summer. They offer full service meals and they also offer a housekeeping option where you prepare your own meals in select cabins. All the cabins have wood stoves and gas lanterns. Some have kitchen facilities.

We arranged with Holly at the camps to meet their shuttle snowmobiles at the Abol Bridge parking area (the Winter entrance to BSP) at 10:30AM that Saturday. The lots were full, which was a huge change from last year when Tammy and I parked here and there were only two other vehicles besides ours. The camps offer to shuttle all of your personal gear into the camps with an option to ride with them to the summer BSP gate at Togue Pond two miles away, and an optional ride near the end of the trek at Avalanche Field for the last three miles to camp. The middle part of the trek is along the East tote road inside the park and as such does not allow motorized travel for visitors in the winter months.

We paid for the shuttle service to the Togue Pond gate, but declined the option at Avalanche Field. We wanted to ski the entire 9+/- miles from the gate to the camps. It was a cold and windy day, but it was a good temperature for active sports and we had plenty of warm gear, snacks, and water for the 6 mile ski along the tote road and 3 mile ski from Avalanche Field. The three snowmobiles dropped us off at the Togue Pond gate a little before noon and we headed out with our skis and day packs. The snow conditions were perfect. We were slow and steady and encountered a couple of groups with full gear sleds heading into Roaring Brook or Chimney Pond bunkhouses.

We encountered one steep, blind downhill where Tammy fell and a guy with a full sled hit her from behind in the trail. I thought for sure she would be hurt, but luckily she had planted her pole beside her where the sled struck. It didn’t hurt her, but her pole was nicely bent. I straightened it out as best I could, but it will never be the same ;). 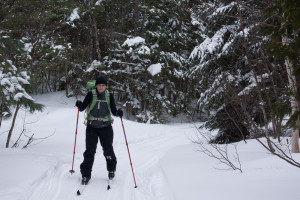 The trek to Avalanche Field was uneventful after that. We didn’t make good time as it was gradually uphill most of the day and we didn’t get much glide on our skis. Once at Avalanche Field we headed off on a single track snowmobile trail that is a hiking trail in warmer months. It was steep and difficult as it was only wide enough for a snowmobile, which made it hard to plow on the steep downhills, and hard to herringbone on the steep uphills. If memory serves me, there was a 400 foot drop in the last 3 miles.

We made it to our cabin (Windy Pitch) before dusk and there was already a fire lit so it was nice and toasty inside. We gathered our transported gear and began the unpacking process. We were provided all cooking and eating utensils, potable water, and plenty of wood for heat. This night was my turn to cook so I made rice pilaf with chicken strips and gravy; quick, easy, and satisfying. We didn’t stay up too late this first night as we were all pretty tired from the day’s trek. 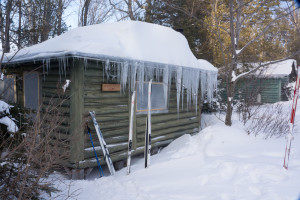 The following day we had planned to be shuttled back to Avalanche Field so that we could ski the mile or two into Roaring Brook and snowshoe/ski to Chimney Pond at the base of Katahdin, but the wind was blowing so much, and the clouds had settled in so Tawn and I decided to try snowshoeing on the Lake. We only made it about 1/2 mile toward the outlet when we took a break on shore and decided to head back. It was so windy it almost blew me over a couple of times. 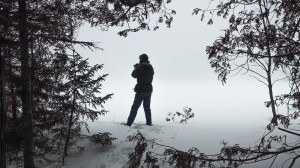 Keith in an Almost White Out 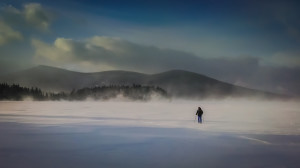 A young family had been playing on the shoreline near the cabins when we left. When we returned the adults were making an igloo, while the kids were sledding down the embankment on the shoreline. Too cold and tired to stay out, we welcomed the warmth of our little cabin. Later in the day, Tammy and Tawn snowshoed back up the path toward Avalanche Field for a bit to get some more exercise. 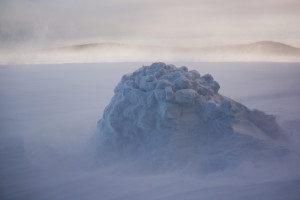 This evening Tawn made spaghetti, meatballs, and sauce. It was all pre packaged, but it was awesome. We also had some of Tawn’s home made wine, which was the best I have ever tasted. Damn was it potent! I was hoping I didn’t drink too much, ’cause no one wants to run to the out house in the middle of the night with the temperature below freezing and the wind howling ;).  After dinner we explored the lodge where the staff feeds those that purchase the meal plan. The place is very cozy and has some amazing photos and art work on the walls of the Baxter area. We arranged to have them shuttle us to Avalanche Field early in the AM.

It was still cold and a bit windy the final morning, but the sun was shining! We finally got a glimpse of the mountain from the lodge on this last day of our trip. 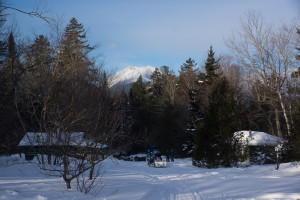 Pamola Peak from the Wilderness Camps

The trip to Avalanche Field was uneventful, but I really noticed the elevation gain and was amazed that we skied down this two days before. Once at Avalanche Field we began the six mile trip back down the tote road where we would be picked up again for the final shuttle back to Abol Bridge. I was still cold and windy, but the wind was at our back and the sun was shining down.  I gave my truck keys to one of the drivers and he was nice enough to put all of our gear in my truck back at Abol Bridge, then drop off my keys on the way back by. The trip out was only 2 1/2 hours or so. I didn’t realize during the ski in how much elevation we had gained. If we weren’t going directly downhill on the trek out, the slope was enough to give us the opportunity for some good glide on our skis.

We timed everything perfectly. We had only been waiting at the Togue Pond gate for 15 minutes or so when our snow machine shuttle showed up. We shuttled back out to our truck and  got ready for the 3-4 hour drive home.

I’m disappointed that we were unable to get to the base of the mountain and Chimney Pond, but we’ll try again next year. The staff at Katahdin Lake Wilderness Camps was awesome. They were so pleasant and helpful. We will definitely come back here to stay with them. It was a great trip that I would recommend to anyone any time of the year.