On Veterans Day I ventured over to Randolph, New Hampshire to do some exploring. My main plan was to spend the day hiking Mt. Adams, but as the sun began to rise as I was driving through Gorham, NH I could see that the clouds were low and the higher elevations were covered in snow. Don’t get me wrong, I like the snow, but with the low lying clouds I didn’t expect to see much from the summit. I switched to my backup plan of hitting some waterfalls in the area. I thought it would make a great tribute to my Uncle who passed away on Veteran’s Day last year. I was hiking in the Randolph area when I received the news. Not trying to bring anyone down. Really the opposite. I wanted to rejoice (WOW! not sure if I ever expected to use that word in this lifetime 😉 ) in his memory and relive all the good times in my mind. It was all good.

I ventured to what some call Triple Falls just off from the Pinkham B (Dolly Copp) Road. The falls consist of Proteus, Erebus, and Evans Falls.  Access to the falls is via a fairly unused trail about 1.5 miles from route 2 where a bridge crosses Town Line Brook. The trail is very short (0.1 – 0.2 miles) and provides quite a payoff for the amount of effort involved to reach the falls. Proteus is the first fall in the series and I believe it’s the most picturesque of the three. There was a light dusting of snow that provided a little highlight to the colors of the moss and rocks.

For anyone interested, Randolph, NH is a superb place to hike, snowshoe, and cross country ski. The Randolph Mountain Club maintains two overnight cabins, two shelters, and over 100 miles of trails in the Randolph area, providing direct access to Mt. Adams and Mt. Madison. 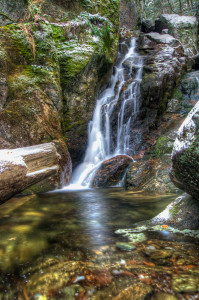 I finally took the plunge and moved my kcorson.com and keithcorson.com domains to a new web site dedicated solely to my photography. After a few weeks of learning the new platform and trying to make everything exactly as I wanted, I finally decided that I had to act and make the move, otherwise I would never finish. By making the move I am forcing myself to get things functional and not worry about perfection. Over time I will be providing additional blog content over there detailing my workflow process and will add more selections from my most popular photographs.

All photos are available for on line purchase or I can be contacted directly with any questions or assistance. I can also provide a variety of personalized formats not available on line.

This site is now hikeography.com and I will continue to update with content from hiking and photography projects.