I was going to just add to my previous post on my Acadia trip, but I wasn’t sure if it was appropriate to just add on as if you were the ‘one’ person 🙂 to read this post, why would you go back to it to read the continuation…. right??? So, here is a new post for the continuing story…

This picture was taken on the carriage road to the West side of Eagle Lake. We mountain biked along this road to the Jordan Pond area and back to our starting point via Bubble Pond. The road seemed to go uphill forever with multiple switch backs and small wooden bridges over this same stream. Near the beginning of the carriage road a large buck ran across in front of us and stared back through the woods for at least 5 minutes. I didn’t have my 300mm zoom attached so we just watched. When I realized that he was just going to stand there, I finally pulled out the zoom and attached to my camera body, but by then the view was too obstructed. I have had many opportunities for good close ups, but only having my 18-55mm attached. I now realize why many people keep two camera bodies handy; each with a different lens attached. Maybe when I have $$ in my pocket that I have nothing else to spend it on. 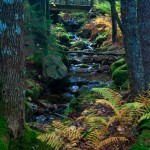 We spent the rest of the day biking a decent loop (shown in the map below) and shooting pictures along the trail. Had an awesome time spending three days at Acadia, even though the weather wasn’t the best and the foliage was beyond peak. I hope to get back this winter to ski and/or snowshoe on the carriage trails and get some winter shots.

I had a little bit of vacation time left this fall so I took the week of Columbus day off. That weekend my bud Dan and I took my camper to Black Woods Campground at Acadia National Park. The park is only about 3 hours from my home so I may take it for granted, but it is an awesome National Park that everyone should visit if they have the chance. Black Woods is a semi primitive campground as it has no electric hookups or shower facilities. There are bathrooms and strategically placed faucets for drinking water throughout the campground. There are public showers just outside the campground on Rt. 3 (see map).

I dragged Dan along on my photo adventures and he never complained (at least not out loud). I was somewhat disappointed as I was hoping for peak fall foliage, but it was a bit beyond. We traveled to the Carriage Road bridge over Duck Brook early the first evening. This was my first time to the bridge so did not realize that the setting sun would be directly upstream from the perfect vantage point downstream from the bridge. Oh well, live and learn. I’ll be back. I did get a nice shot of the rapids above the bridge shown here. I used a 13 second exposure to really feather out the flow, but noticed upon import into Lightroom that the tree limbs and leaves were very blurred due to the light breeze. I decided to play with some options and completely reduced the clarity and sharpness of all except the stream using the adjustment brush. I like the resulting effect. 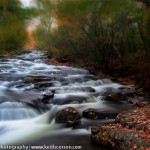 Later the same evening we drove to the Stanley Road off Rt. 3 in Seal Harbor. It is an option for getting into the National Park without having to pay the fee for the loop road. There isn’t much stream flow under the bridge. As you can see from the picture, the stream is under the arch to the right. But it is one of the most picturesque bridges in the Park. 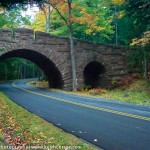 I will add more pictures and destinations as time permits….

So…. since it is beginning to get cold here in the North East and the weather is becoming unsettled, I think it’s time I go through the back log of photos and travels I have been on this past year. Lots of catching up to do so I will begin with a trip I took to Baxter State Park during the last weekend of September.

We headed out early in the morning on September 21 from my folks camp between Farmington and New Vineyard. I really wanted to get into the park early and over to Roaring Brook campground so Tam and I could hike over the top of Katahdin. We didn’t get to the campground until 10:30AM, which is a little late if you want to do the entire mountain and depending on your chosen route up and down. We were intending on taking the trail beside Roaring Brook to Chimney Pond. From there we would go up the Saddle Trail to the top of Baxter Peak. Then we would head across the table land and down the Hunt Trail to Katahdin Stream Campground, which also happens to be the Appalachian Trail. We made it the 3.4 miles or so to the Ranger shack at Chimney Pond at 12:30. The ranger wanted to make sure we knew what we were in for at it gets dark early this time of year. I’ve been up the mountain multiple times and figured we’d be fine. We headed for the Saddle Trail, which I had never ascended or descended. It’s a fine, gradual hike out of the bowl that contains Chimney Pond, but gets extremely steep and gravelly further up. It is the remnant of a land slide so we were very careful not to disturb the loose gravel when possible. Last thing anyone behind us would want is a pile of rocks careening down the mountain toward them. Luckily anyone above us had the same courtesy. We met a few people on their way down. I was glad we were ascending this route as I would not want to descend. It was really strange when we reached the top of the trail and came out onto the relatively flat table land. It was such an abrupt change. One minute we were climbing hand over fist for what seemed to be straight up, next minute we were on relatively flat ground.

Looking at the image below, we ascended slightly to the left. 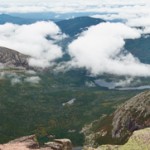 We headed for Baxter Peak, the official highest point in Maine. It is another mile or so to the peak and it doesn’t look very steep or far, but looks sure are deceiving. It took us another 45 minutes to an hour to make the final ascent. The wind was howling this day and we donned all of the clothes, gloves, and head gear we brought. There were not too many people at the peak, relatively speaking (I have been there and counted over 50 people in a 20 minute period) so we decided to find a wind break and eat lunch. 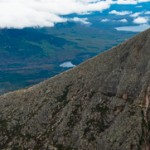 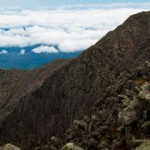 We talked to a couple of people who were ending their journey of hiking the entire Appalachian Trail and headed down. I had forgotten how far the table land stretches as the distance is deceiving, but it is another mile+ to the escarpment and descent to the Hunt Trail. 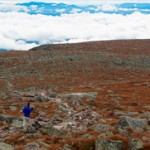 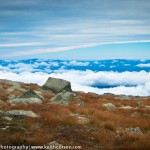 I had also forgotten how grueling the Hunt Trail is for descent. It is very steep and their are boulder scrambles most of the way. I usually love to stop at Katahdin Stream Falls, but was so exhausted that I only stopped for a couple of pictures way below the falls where the trail crosses Katahdin Stream. We met my mom at the Katahdin Steam Campground parking lot at just about 6:30PM. We did 11 miles total over the summit in 8 hours. Not too bad, but weren’t we wiped out! If you decide to tackle the mountain in a single day I have just one bit of advice. GET ON THE TRAIL EARLY! 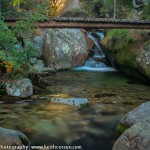