Over the last weekend I traveled to the Hocking Hills area of Ohio, about an hour away from Columbus. I was on a business trip for the week just outside Dulles, Virginia and decided to fly back by way of Ohio. I have wanted to photograph the Hocking Hills area for some time and it looked like a perfect opportunity. I had seen pictures of deep, dark gorges with beautiful waterfalls. Well…. word to the wise…. there is NO water in Hocking Hills during the summer. No where in my research had I found this little tidbit of information. Apparently, the only time there is flowing water in these parts is after the spring snow melt and shortly after good, steady rainfall. Regardless, I had a great trip and produced some wonderful shots of the rock formations in the area.

I stayed at Chandler’s Enchanted Acres in a nice, new log cabin with few amenities. There was a small fridge, microwave, and coffee pot, but no running water and the lavatory is a porta potty. I’m fine with that as it is more than I’m used to when doing this stuff, but beware if you’re used to being in a full service camping area. It was reasonably priced and I had the place to myself.

Also be aware that it is hard to find anything in this area of Ohio. There is only one gas station within 15 miles, you will be hard pressed to find a restaurant or pub, and it took me the better part of two days before I found a place that sold coffee by the cup. The area is beautiful, hilly, and somewhat remote so come prepared.

I was able to explore the major areas over a two day period, but could definitely spend more time either in the spring or during fall foliage. The major areas are Old Man’s Cave, Ash Cave, Cedar Falls, Conkles Hollow, Cantwell Cliffs, and Rock House. Ash Cave and Old Man’s Cave are both recess caves, meaning that they are really cliff faces where the ground level portion has eroded under the main cliff face. Conkles Hollow is a narrow gorge enclosed by high walls of sandstone. Cantwell Cliffs is an area where steep cliffs wall a narrow gorge. You can explore some of the cliffs up close, walk the gorge, or follow a path around the cliff tops. Rock House, my favorite, is a group of caves carved in limestone on a cliff face.

On my last day I had a couple of hours to kill before making a flight out of Columbus and noticed a road sign for Soaring Cliffs zip lines. I stopped by to inquire and they were able to get me in immediately on a solo tour. The staff was awesome and the zip lines were thrilling. My first time on a zip line, but definitely not my last!

I have plans on coming back here with Tammy some spring when the water flow is full bore……. 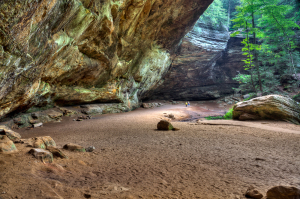 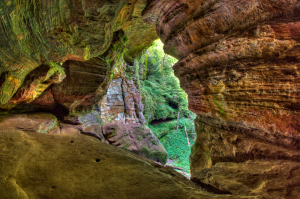