Sunday morning I got up real early as the daytime heat over the past few days had been oppressive and I wanted to beat as much heat as possible. I decided to head to a location in Greenwood that a colleague had told me about that the locals call “the Potholes”. Some will disagree with me as to what river/stream it is on, but either way, the geographic location is the same. Some have told me that it is on Black Brook and some that is is on the Little Androscoggin River. If you look at the DeLorme gazetteer it will verify that it is part of the Little Andrsocoggin.

I have embedded a Google map at the end of the post to show the starting location and the location of some of the pictures here.

To reach the potholes you have to walk an active railroad for a couple of miles, which is illegal, so kids don’t try this at home… yadda, yadda, yadda…. You can probably reach them via a North or South entry, but my colleague showed me how to approach via the South. Drive to West Paris on route 219 and continue toward Greenwood. The Little Androscoggin River parallels the road on the right. Route 219 crosses over the Little Androscogging then veers left where Old County Road continues straight. Shortly after the left at Old County Road, the railroad comes in high above the road on the right and there is parking on either side of the road. As a second option, you can travel a 100 yards or so further and park where Route 219 crosses the river again at a little spot on the right. Walk North on the railroad tracks. Cross a stone trestle where if time permits there is a path leading along the river back to route 219. Nice falls here! I explored this area on my return. Shortly after the stone trestle you can hear water rushing to the right side of the railroad. There are a great bunch of boulder falls located here. I also explored here on my return. 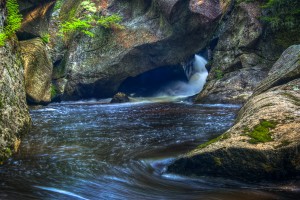 At 1.25 to 1.5 miles cross a steel trestle. This can be creepy if you are afraid of heights. At approximately 1.75 miles there is an old, round, cement tile to the left of the railroad. Enter the woods here and walk straight on to the potholes. The potholes are really interesting and I could have spent hours here exploring, but I didn’t have too much time to linger. I spent an hour or so looking around and locating some interesting features. There is one place where the water has carved a narrow chasm in the ledges 50 or 60 feet long, 20 to 30 feet deep, and only a few feet wide. I’m planning on coming back to this feature to attempt to get down in with waders to take some photos along the length of the chasm. Once the river emerges from the Potholes, it breaks over a large set of falls into a tranquil pool. Be aware that there are no footpaths here and it is wet, muddy, buggy, and the evergreens are dense. Soooo worth the effort though! 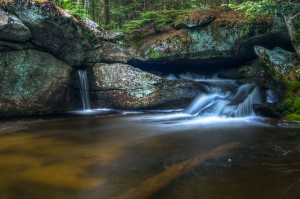 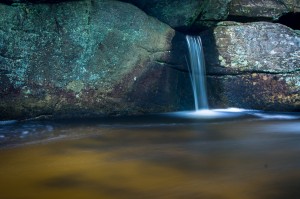 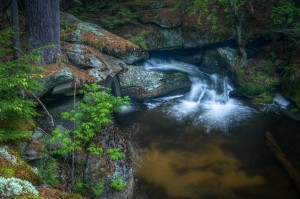 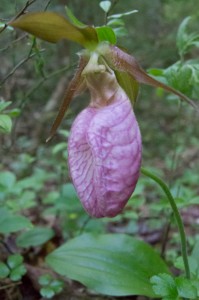 View Little Androscoggin Potholes, Greenwood, ME in a larger map

The Vaughn Woods in Hallowell, Maine is a 166-acre property, owned and managed by the Vaughan Homestead Foundation. It has three stone bridges (the lower bridge has a stamp indicating it was constructed in 1930), waterfalls, and man made Cascade Pond (downloadable PDF trail map). Many locals call it “Hobbit Land” due to the Lord of the Rings type of scenery found here.

It can be reached on the North side from the intersection of Middle Street and Litchfield Road in Hallowell, and from the South behind Hall Dale High School in Farmingdale.

Tammy and I visited on May 31st and while it was above 90 degrees in town, here it was bearable due to the overhanging foliage canopy and the water flowing through the gorge. The main path around Vaughn Brook can’t be more than a couple of miles total, and I expect it’s much less. This location is well worth visiting and we’ll definitely be back during the Fall season. 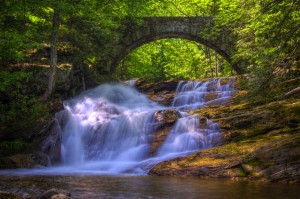 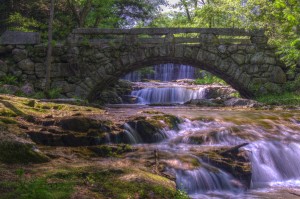 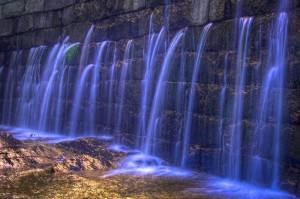 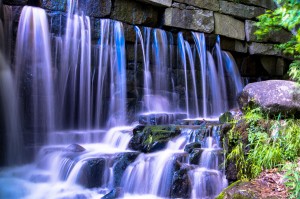 On Thursday, May 30th, Tammy and I headed to New Hampshire with the intent of taking the whole day on our time schedule to tackle both Mt. Adams and Mt. Madison, the two Northernmost major peaks of the White Mountain Presidentials. Family obligations changed our plans. We would have the day until about 3:30PM to get in whatever hiking we could, so we decided to head for Mt. Adams via the Appalacia parking lot off route 2 in Randolph, NH.

The Randolph Mountain Club maintains two cabins (Crag camp and Gray Knob camp), two shelters (the Log Cabin and the Perch), and 100+ miles of trails around the Northern Presidentials and Crescent Range. There are three easy access parking spots.  One off route 2 on the Pinkham B/Dolly Copp Road, one on route 2 called the Appalacia parking lot, and one at Lowe’s store in Randolph. I believe Lowe’s charges a couple of bucks for parking and if you go there make sure you pick up the Randolph Mountain Club topo map.

I had planned on hiking up via the Valley Way and Brookbank trails to check out some of the waterfalls along this path, but another guy was heading this way with his dog, and since our Jack Russell doesn’t socialize very well, we decided to come back down via this route. So we headed off on Sylvan Way toward Cold Brook and Cold Brook Falls and the junction with the Amphibrach trail. The falls were gushing and spray made it look misty in the stream bed. I’ve been here at a lower flow, but this was a LOT OF WATER! We crossed the bridge over Cold Brook and headed up hill. 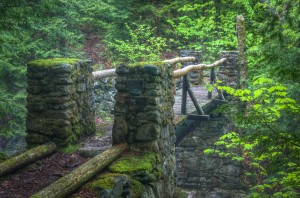 We stayed on the Amphibrach until it reached the five way intersection called the Pentadoi. The trail is pretty gradual until it reaches the Randolph Trail at the Pentadoi and the brook crossing below Chandler Falls. From here it’s straight up all the way to Crag Camp on the Spur trail (roughly 3.9 miles from route 2). I stopped just below the camp at lower crag to give the pup (more accurately ‘me’) a rest and to wait up for Tammy. It was cloudy and windy so I could not see much of King’s Ravine from the lookout at lower crag, although I could see snow in some of the slides in the ravine. Took some pictures of our little JR, Sage at this point. 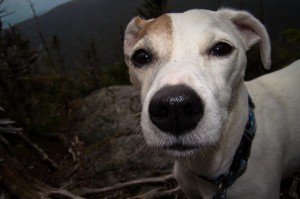 From here Crag Camp is almost within throwing distance. It perches right on the edge of King’s Ravine! Nice spot and great cabin! It has two bunk rooms that sleep 8 each, and one extra bunk room that sleeps 4. It has a common kitchen and dining area and a privy out back. 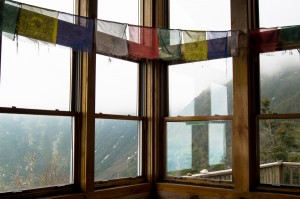 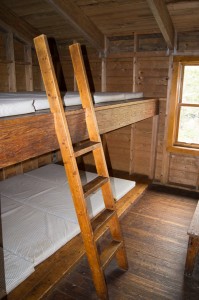 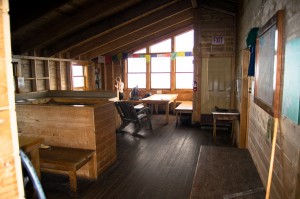 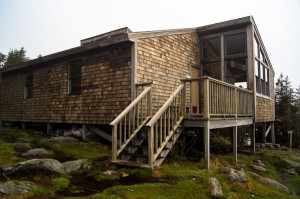 At this point, since we were on a schedule, we decided not to attempt the Mt. Adams summit. It’s about another 1500 feet of elevation from Crag camp. We didn’t have the time and it was still pretty overcast. We headed toward Gray Knob camp on the Gray Knob trail (.5 miles). There is little to no elevation gain on this trail, but it is parallel to the mountain and quite rough with large boulders and even some SNOW! Although short, this was probably the most tiresome part of the hike. Gray Knob camp is smaller than Crag, but very cozy. Instead of bunk rooms off the main floor, the bunks are on the second floor with an open stairway. There is not much of a view from here, but it’s a great option if Crag camp is full. 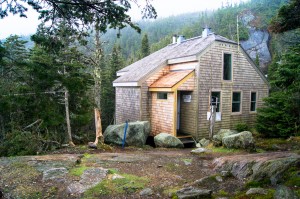 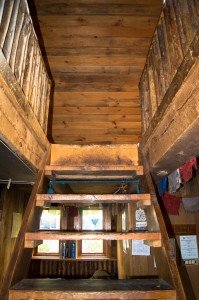 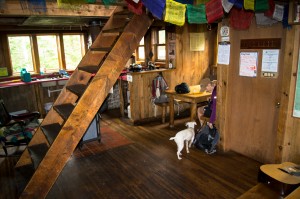 We ate a small lunch and headed down on the Hincks trail, which is just as steep as the Spur trail, but wetter. We met back with the Spur trail near Chandler falls and retraced our path back to the Pentadoi. Here we took the Randolph path 1.8 miles to Valley Way and Brookbank trail. Brookbank and Brookside follow Snyder Brook where there are many cascades and three major falls (Tama, Salroc, and Gordon falls, from highest elevation to lowest). I tend to prefer a gentler water flow for photographing water, but all of the falls were reasonable this day. Only bad part was that it was the middle of the afternoon when we reached this location and the direct sunlight was terrible. I got a few decent shots including the one below. Total distance round trip was approximately 7.2 miles. 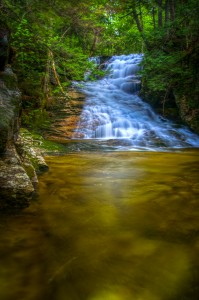 This area has so many options for day or overnight hikes that the Randolph Mountain Club even offers a hiker log book pdf to keep track of all the options. I’m sure we’ll be back again to tackle more trails, summits, and streams.

Back to my New York trip for a quick post. On the same day that I explored Watkins Glen, I also drove South to Montour Falls, New York to explore some easily accessible locations.

Shequaga Falls is right in town Montour Falls in a small park on Genesee Street. Don’t blink as you’ll miss the park. It’s about the width of a house lot and is sandwiched between two private homes. Beautiful spot thought. There were locals eating lunch here on public benches. Nice spot to take the kids for a half hour to break the daily grind. 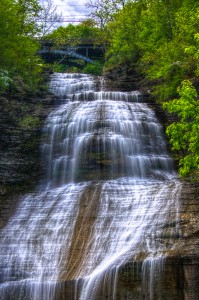 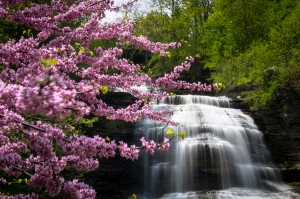 I had intended on checking out Havana Glen, which is a park at the Montour Falls Town Office, but it doesn’t open until Memorial weekend, so I checked out the close by Deckertown Falls on Catlin Mill Creek. All around is private property and it’s well posted. As a result, I was only able to walk to two of the falls here. Well worth it if you are in the area, but not a destination in itself. 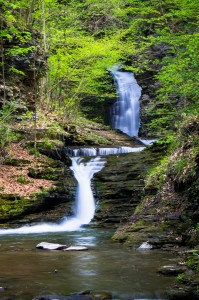 I think that does it for the areas I explored in the Watkins Glen vicinity. My next post about NY with be about the day I visited Buttermilk Falls State Park. Until then….