Tammy and I went to Nahmakanta Lake Camps over a long weekend. We had been planning this for a few weeks. I found out about the camps while hiking the 100 Mile Wilderness in the Katahdin region of Maine. While hiking the Appalachian trail along the edge of Nahmakanta Lake, my niece and I found ourselves on the top of Nesuntabunt Mountain overlooking the lake. We could see a beach, boats, and cabins at the North Western shore of the lake. When I got home from that trip, I researched the area and found the camps run by Don and Angel Hibbs. Contacting them through email I found a weekend that worked for both parties. The Hibbs offer a full service option with meals or a housekeeping only option where you provide your own food. We chose the housekeeping option as sometimes we like to keep to ourselves.

The camps can be reached north of Brownville, Maine on the road to Jo-Mary Campground or via the Kokadjo area north of Greenville, Maine. Be advised that both methods of access require driving on 30+/- miles of dirt road and if you choose the Kokadjo route, the road is worse, but there are no fees this direction. We chose the Jo-Mary option. Upon reaching the access road there is a check point where you are required to pay an entrance fee. There is also an exit fee. The Hibbs provide a discounted coupon when staying at their facilities. There are also an abundance of first come/first serve camp sites in the Jo-Mary Wilderness that may be of interest.

On our first day we arrived early in the day and hiked into Rainbow Stream Lean-to. This was my favorite section of the Hundred Mile Wilderness and I wanted Tammy to enjoy it. I fished a bit in the stream (catch and release, artificial lures only during this time of year) and made a lousy attempt at landing an 8″ brookie. After giving up on that I took some photographs of the stream while Tammy headed out along the trail. We reached the lean-to after a couple of miles and ate a snack for lunch. It is really a beautiful spot and a great place to use as a base for fishing some of the back country ponds. Just before we headed back, a couple of guys showed up on their way back from fishing Bear Pond. They were also staying at the camps and unfortunately had no luck this day. I had heard that there was a shorter access path to/from the lean-to, but was unsure where the path was and where it would end up, so we decided to back track the way we had come. Half way back, we ran into John Winter, my friend’s son who was finishing a North bound through hike of the AT. I thought that he might be in the area as I knew his projected completion date, but I was reasonably sure that he was further North on the trail and we had missed him. What an awesome experience to meet up with him and some of his trail buddies. We visited for the better part of an hour before they decided that they needed to make it to the shelter at a reasonable time. John wanted me to hang out at the shelter with them that night, but I had paid for a cabin with a wood stove for heat and didn’t want to give that up for a night in a lean-to. I know…. I’m getting old. 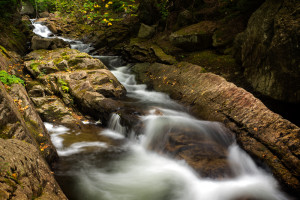 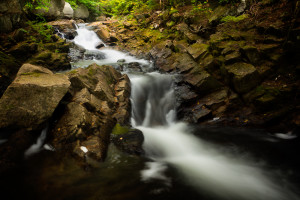 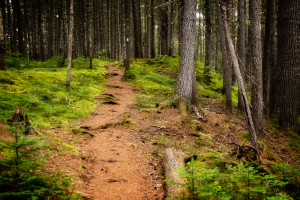 Trail to Rainbow Lean To

We made our way to the camps in the late afternoon and checked in with Angel. She showed us our cabin and went over all the details. It had a private, detached bathroom and shower, full kitchen, two beds, and a wood stove for heat. There are also canoes and kayaks that come with the cabin fee, and motor boats for an additional fee. We got our camp fire ready (right on the shore line) and started cooking dinner. It was so peaceful. No sounds of cars or trucks. No light other than the gas lamps in the cabins and the camp fires on the shore. Perfect! 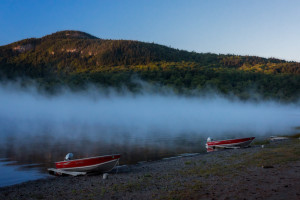 The next morning we rose early, cooked breakfast, and I went to talk to Don about suggestions for fishing. I decided to try 6th Debsconeag pond as I had heard good things about the brook trout here. Don showed me the best places to fish and said that while the trout might not be plentiful, if I caught any they would be of descent size. Tammy and I grabbed a canoe and paddled about two miles down the lake to a spot indicated by a large, painted red spot on a boulder along the shore. Landing the canoe here, we unloaded, packed up and headed up a woods path about a mile to the pond. We were the only ones at the pond and I landed a 15″ brookie within the first 30 minutes. The landing included the normal stressed hilarics of Tammy trying to get the net to help me and me yelling “don’t stand up!”, “hurry up I’m gonna lose it!” Of course that was the only strike I got this day, but it was all worth it. The biggest fish I’ve ever caught on a fly rod! 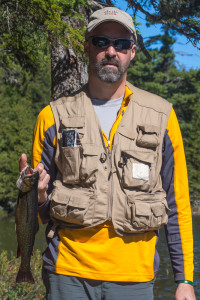 After the hike back and paddling the two miles to the camps, we decided to explore a couple of the waterfalls in the area. Don suggested some falls along Pollywog stream in Pollywog gorge. I remember hiking the top of the gorge earlier in the year with my niece, but the edge was so wooded we could not see into the gorge. We drove directly to the outlet of Pollywog pond and took a short trail maintained by Don and his crew. The outlet of the pond flows directly into the gorge over a significant drop. A half mile or so further into the gorge is a better set of falls. The trail was fairly easy, but very steep getting down to the lower falls. It was a great afternoon hike. 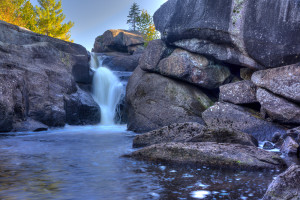 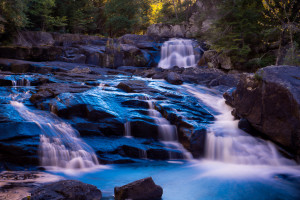 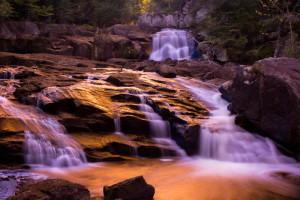 We headed back to our cabin once again to cook dinner. Tammy made a superb linguine with garlic, lemon, mushrooms, onions, peppers, etc. I started the camp fire again and we drank some fine beer. One of the best was a pumpkin porter made by Red Hook out of Portsmouth, NH. The next morning I cooked breakfast with the addition of the trout caught the day before. It was perfect. I find that larger trout sometimes taste fishy (go figure), but this was clean and mild. So good! We packed everything up to get that out of the way and did some kayaking around the two inlets of Pollywog and Rainbow streams. Unfortunately we headed home shortly after. Great thanks to Don and Angel for the wonderful time. We will surely go back again.