We finally awoke to a beautiful, crisp morning. The peaks in the gorge were still cloud covered, but the Columbia river was clear and we could see the clearing skies heading East from Portland. This was the day we would hike all day. This was my main reason for planning our vacation in this area. We would hike Eagle Creek, the most popular hiking trail in the gorge, to and beyond Tunnel Falls. After an early breakfast, I packed my camera equipment and we grabbed some snacks and water for the hike. We drove to the main parking area for the Eagle Creek Trail #440. We did not park at the head of the trail as we were advised that there had been vehicle break-ins there in the past. By parking at the main parking lot we were adding 1/2 mile to the hike each way (about 14 miles round trip), but we were getting a little peace of mind. On our walk to the parking at the head of the trail we noticed an awful stench like rotting fish and guess what…. it was rotting fish. Salmon were spawning in the creek and many were dead and decomposing. The creek was full of huge salmon. I believe most were finished spawning, but some were still skipping through the shallows on their sides. We saw a heron looking ready to feed, but was not able to get any decent pictures.

Sunshine over the Gorge 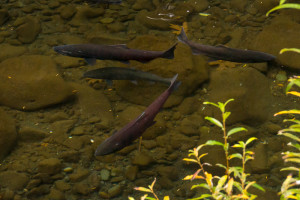 The trail begins with a gradual incline on the left side of Eagle Creek heading upstream. It is cut into the side of the gorge wall almost from the beginning. As the trail continues it migrates up the side of the gorge wall and the width decreases. In some of the more dangerous areas there are cables hooked to the gorge wall for stability. The area was absolutely gorgeous and continued to impress the further we walked. As the trail moved away from the gorge into old growth forest, we reached Metlako Falls , the first of many, at around 1.5 miles. The falls can be viewed from a short side spur. There is one pretty good location to photograph although it requires a telephoto lens as the falls are about 1/4 mile away from the view point. At around 2 miles we reached a side trail leading to the bottom of the gorge and Lower Punchbowl Falls. We descended and received a head on view of Lower Punchbowl. Walking up the creek bed we rounded a corner and were face to face with Upper Punchbowl Falls. This is much more impressive than Lower and well worth the side trip to the bottom of the gorge. As we were about the head back up the side trail I noticed that there was a ‘trail’ of sorts right up the sheer side of the gorge. Knowing that the shortest distance between two points is a straight line, I wanted to go this route. Tammy said, “Is it a trail?”. I said, “Of course it is.” I could see tread marks so that’s a trail right? Well, we make it to the top, but not without a lot of sweat and a re route or two. So… it was the shortest way to get out of the gorge, just not the easiest. Anyhow, our route out of the gorge landed us at a viewpoint over Upper Punchbowl. I decided that I’d take photos from this location on the way back as the falls were too back lit from the morning sun and by the time we made it back here in the afternoon, the sun would be behind the far wall of the gorge. 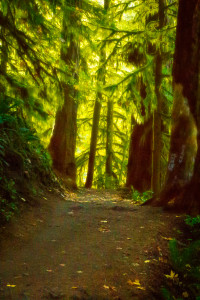 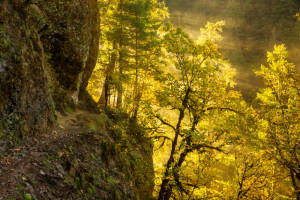 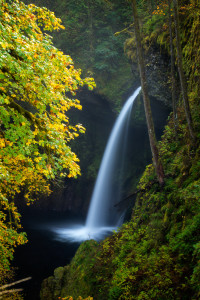 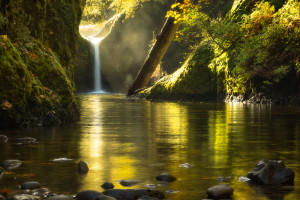 Off to High Bridge at 3.3 miles. This is the first crossing of the gorge and marks the beginning of permitted camping. The trail becomes wider, but in places it was 120 feet above the gorge floor! On the way we passed by the single drop of Loowit Falls on the opposite wall of the gorge. High Bridge was a little sketchy. It was sturdy, but it was very narrow and very high above the gorge. Made me a little uneasy. A few tenths of a mile later there are limited views of Skoonichuk Falls. The forest noticeably thins in this area and a sign indicates that there was a forest fire here in 1902. As we continue on, the trail gradually loses elevation until it again crosses the gorge at the appropriately named 4 1/2 mile bridge. This bridge is very different than High Bridge being only 4 feet above the creek. We met some folks here relaxing in the sunshine on the rocks in the creek. 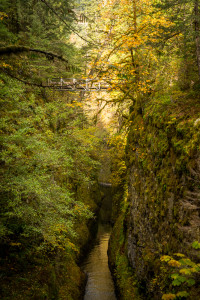 After crossing at 4 1/2 mile bridge the trail meanders back into the forest and gains elevation as it pulls away from the creek. The trail passes more campsites with a particularly impressive one just off the trail to the left. Near this section the forest changes from evergreen to hardwood. The trail runs pretty straight for a while and after crossing a couple of talus slopes you come upon the area known as the “Potholes”. The trail here crosses over the top of basalt columns and is one of the coolest portions of the trail. As the trail began to narrow again I could hear the sound of rushing water. Continuing along I could catch glimpses of a waterfall behind the trees around a bend. We must be approaching Tunnel Falls! This is what we hiked 6+ miles for! We emerged from the forest and the falls were before us in their full glory! What a beaut! As we approached the falls and the tunnel behind, the trail became wetter and narrower. There were no handrails on the approach, but shortly after emerging from the tunnel, the handrail began again. I passed another hiker admiring the falls just past the narrowest part of the trail and set up to get a shot of Tammy emerging from the tunnel. It was awesome! After a quick photo shoot and a movie, we headed to our designated lunch spot another couple of tenths of a mile up the creek. The approach to Twister Falls (sometimes called Eagle Creek Falls) was the narrowest part of the entire hike and is often referred to as the “Vertigo Mile” for a reason. You are higher up and more exposed on this section than anywhere else on the hike. There was another couple eating lunch at the same spot, but there was plenty of room to get privacy if you wanted it. After a light lunch, some relaxation, and more photos, we headed back the way we came. 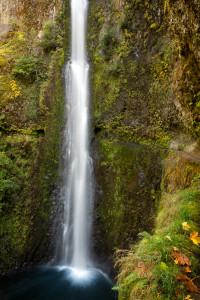 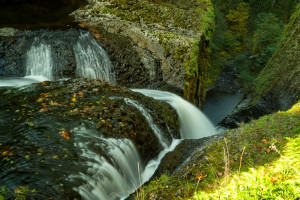 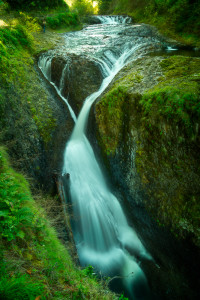 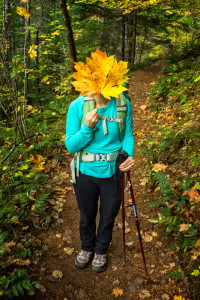 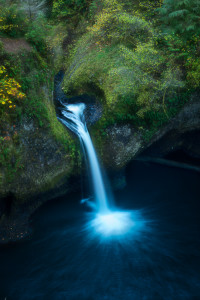