On the weekend of January 13th and 14th Tammy and I hiked in to Daicey Pond from the winter access parking lot of Baxter State Park. You can find tons of info at this link (Baxter State Park Authority). The winter parking lot is located just across the road from the convenience store at Abol Bridge on the Golden Road. We stayed at the Katahdin Inn and Suites in Millinocket (formerly the Econolodge) the night before. I wasn’t expecting much, which was a good thing as it wasn’t much. A clean place to sleep so we could get an early start in the AM. We reached the parking lot at about 7:30. There were a couple of passenger vans and two cars from Mass. On a side note, don’t plan on driving to the location of the regular season access gate. It is a snowmobile trail in the winter.

The trail to Daicey begins on the Appalachian Trail. About 1/2 mile north there is a big kiosk and a trail breaks off to the right heading for Abol Pond and Kahtadin Stream campground. This was the only trail that had been broken since the last 2 or three inches of snow, but it was not our path. We continued on the AT for another 1/2 mile or so to an intersection on the right with the Foss Knowlton Pond trail. This trail skirts Foss Knowlton, Lost Pond, and finally Daicey. You can continue on the same trail to reach Kidney Pond if that is your final destination. We were able to ski in to Foss Knowlton, (about 3 miles) but at that point, it looked like hikers had been going straight across the pond and with the warm weather, I wasn’t too enthused about that. We switched into snow shoes and skirted the east edge of the pond. This trail had not been broken and was deep snow, so we decided to go onto the edge of the pond and skirt the shoreline. Once on the north end, I found the inlet (which was open water) and went back on shore. There is a trail upstream from the inlet, but it had not been broken and the blue trail blazes were faded. I figured there had to be a different trail so we skirted the shore clock wise and found a couple of boats on shore and picked up the original trail. We switched back into skis for about a mile, but it had gotten so warm and the snow was so sticky it was building up directly under our feet, sooooo back to snowshoes at the edge of Lost Pond for the last 2 miles to Daicey (a little over 6 miles total). We never saw Katahdin all the way in as it was cloudy and foggy all day.

It was chilly in the cabin when we arrived, but we started up the wood stove and the cabin warmed up quickly. Baxter State Park supplies wood for the cabins in the off season. There is a big wood shed here at Daicey and another at the cabins on Kidney. 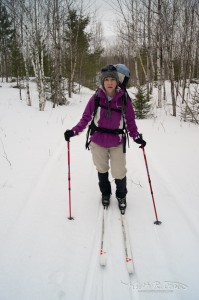 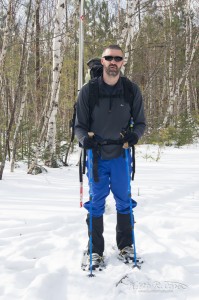 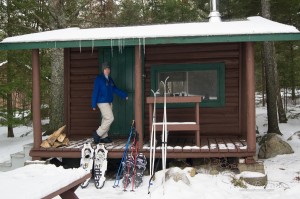 A little gut warmer (Dr. McGillicuddy’s Apple Pie liquor) and some supper of dried broccoli and cheese soup with some rice thrown in and we were full and content. We were the only ones at the cabins all weekend. Peace and quiet! I got up before sunrise on Sunday morning and took some dawn photos of Katahdin. Once the atmosphere started to warm up, the fog in the dawn photo rose up and obscured the mountain for the rest of the morning.

We saw four healthy dear on the slow 6 miles out and saw the mountain many times. Warm sunny day! It was close to 35 degrees! Because of the unusual temperatures, we were forced to snowshoe the entire length out. Still a great hike and great weekend! 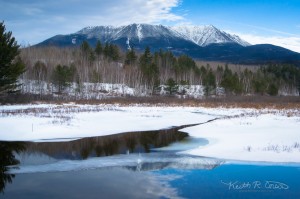