Yesterday, 1/19/2013, I had a chance to get out to some locations that I have photographed before in seasons other than winter. Snow changes everything!!

I began at the Cataracts just off the East B. Hill Road between Andover and Upton. In the more temperate seasons, there is a dirt road on the left side if you are heading north, which will permit easy access to the top of the falls area of the Cataracts. I have been here before early in the winter season and the dirt road hasn’t been plowed. Today, however, it was plowed giving easy access to the upper falls and gorge! I snowshoed down into the gorge with the intention of climbing up to the largest drop. The access to the largest falls is almost vertical from the bottom of the gorge. Luckily I brought one of my Christmas presents. A shiny new pair of Kahtoola micro spikes. They slip over boots using a rubbery web that keeps them attached to your boot. This was my first time using them and I found them easy to put on and they functioned great. Not as good as a full crampon, but much better than just my boots. Below are a couple of the pictures taken here. 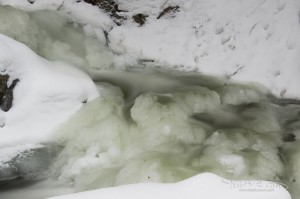 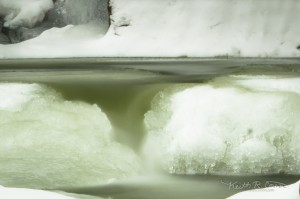 From here I headed north to where the Appalachian Trail crosses the East B. Hill Road and headed south on the trail toward Dun Notch. If following the AT, the notch is just over a mile. Once there, upstream are a couple of impressive falls when the water is running. They can be reached on a blue blazed trail running approximately North. Today with everything frozen and not much flow, it was less than spectacular. The big attraction here is the lower drop (Dun Falls) which are 78 feet high. There is a blue blazed trail heading South, just across the brook. It’s a steep snowshoe and once at the bottom you have to walk back up into the gorge. I was able to take some photos directly below the falls, which are mostly ice right now, but still impressive. 180 degrees behind my shooting position, I fell through the ice at the bottom of the notch. Luckily only one leg went through and I was able to hang onto the unbroken ice. I have no idea how deep it is right now, but I didn’t hit bottom. The water was much warmer than the air and my foot didn’t get cold, but all the water sure added some extra weight! If you keep following the blue blazed trail, it circles around and heads back uphill on a side stream with at least 6 beautiful drops. Here are a couple of shots from the notch. 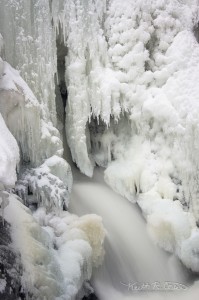 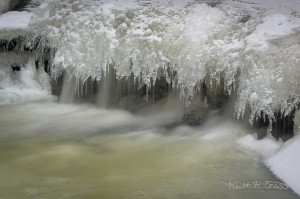 Last stop on my trip today was Screw Auger Falls in Grafton Notch. Since route 26 in Upton is not far along the East B. Hill Road, and Grafton Notch is on route 26, it made sense for me to make the loop and head back home through Grafton Notch. I’ve taken many photos of Screw Auger Falls, and there are a couple on this site, but it’s always an interesting spot and it’s right beside the road. The best shot of this location today is below. 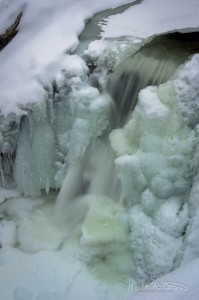