I was on the road by 6:00AM, headed to the Castle Trail in Randolph, NH. The weather report was hot and muggy with a cold front moving in bringing potent, scattered thunderstorms. My best case plan was to make it up the Castle Trail, over the Castles, to the summit of Mt. Jefferson and back an undetermined route before really bad weather set in. As I drove through Gorham, NH toward Randolph, I could see a wall of black to the west hugging the slopes of the Northern Presidentials. I drove by the Appalachia parking area on route 2 seeing that it was packed to overflowing. Cars were parking on the edge of the highway. Not a good sign if you want solitude. I drove approximately 3 mile further to the Castle Trail parking lot on the left of route 2. I was the only one there. The sky looked ominous so I checked my cell phone for signal… none… I drove back toward Gorham until I had decent cell reception and checked the weather forecast at the Mt. Washington Observatory. Forecast was gusty winds, strong thunderstorms, possible hail. Increased chances as the day progressed. I decided that I would hike until the weather turned. My primary goal wasn’t to reach any peak today. I just wanted some exercise and solitude.

The trail begins on an old railroad bed, now snowmobile trail. Watch for signs as there is private property close by. It crosses under power transmission lines shortly where you can begin to hear the Israel River. I was surprised how much water was flowing considering how dry it had been this summer. Once across the ‘river’ (really a good sized brook), the trail parallels the river, meandering toward and away from it. This section is steadily uphill, but gradual and the trail bed is smooth. At 1.3 miles the Israel Ridge Trail diverges to the left while the Castle Trail heads straight on. For the next mile, the trail gets continuously steeper as it turns into a continuous stairway climb. Once above this first steep section, the trail smooths out and meanders for 1/2 mile, steadily uphill, along a wooded ridge. Along this section I began to get one of my symptoms that indicates a migraine coming on. In this case I was getting tunnel vision in my left eye. I came upon a tee intersection and had a decision to make. Continue on, turn around, or take a side trail. BTW, just before this intersection is a spot that looks like it could be used as a tent site in a pinch. Rooty, but flat. Looking at my map I could see that I was at the intersection with the Link Trails, just below the first Castle. Fog was settling in. It was getting breezy. I might have a full blown migraine in an hour or so. I decided that I would go left on the Link (the Fink) down into Castle Ravine (if you go right on the Link toward the Caps Ridge Trail, it’s called the Dink).

Immediately after going left at the Link intersection, the trail becomes narrow and STEEP (down). The trail is maintained well, but did not look like it received much traffic. As such there was a lot of moss and slippery spots. Pay attention if going down this trail! In about 1/2 mile the Link hits the bottom of the ravine and intersects with the Castle Ravine Trail. Just before the intersection are two or three great spots to set up camp. SIDE NOTE ON CAMPING: This area is within the White Mountain National Forest and as such you are not permitted to camp within 200′ of trails and streams.  I turned left at the intersection and headed downstream. I quickly came upon another camping spot right next to Castle Brook. Beautiful spot where I took the below picture: 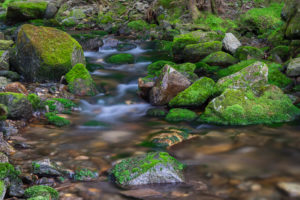 Shortly downstream I came upon yet another camp site where I took this picture: 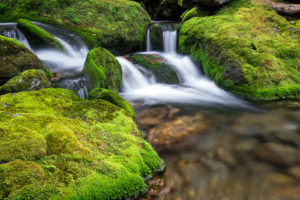 The Link Trail picks up again to the right and parallels the side of a ridge a bit under a mile, where it intersects with the Israel Ridge Trail and Cascade Ravine. Upstream and downstream from this intersection are the First and Second Cascades. I didn’t stop for pictures today as the sun had come out during my hike and would have created too many hot spots. Below are pictures from the last time I was at this spot: 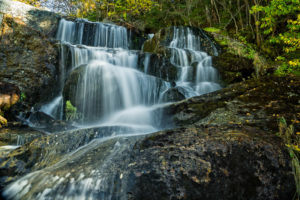 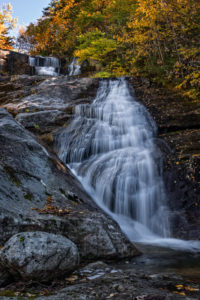 I stayed on the Israel Ridge Trail paralleling Cascade Brook for about a mile where I once again came upon the intersection with the Castle Trail. On my was back to the parking lot I was enjoying the seclusion. Not more than 3 miles from one of the most visited areas in the White Mountains and I had not seen a single person all morning. No sooner did this thought pass through my mind when I met a group of four twenty somethings heading up the mountain. Still not bad. Back to the parking lot by 12:30 PM. Great morning hike!