After a busy Saturday morning on May 4th, I was able to talk Tammy into going for a short kayak paddle. “Short” is a relative term here… It could be a description of time or of distance. In this instance, “short” was distance. We (when I say ‘we’ I really mean ‘I’) had been thinking about kayak options all week. I wanted to do something that I would enjoy (think… quick water), but not so intense that Tammy wouldn’t enjoy it (think… quiet water). We (again ‘I’) decided on a 7 mile +/- paddle on the Little Androscoggin River from the base of Snow Falls on route 26 in West Paris to the dam just outside Market Square on routes 117/119 in South Paris.

The trip started off uneventful. We put in at the picnic area at Snow Falls, carried our kayaks down an old tote road/path to the base of the falls, and loaded up. We took our time to begin, with me showing Tammy how to identify an eddy and how and why they form. I also discussed some of the basics of river hydraulics to try getting here thinking more about how to navigate rapids. Away we headed downstream.

Immediately out of sight of the falls, the narrow river begins to quicken and provides some nice class 1 ripples and class 2 obstacles. I noticed quickly that this small river would not be a good paddle in low water months. We just came off winter and already there were places where we hit bottom (although I admit we have not had much rain fall this spring).

A mile or so downstream the river becomes wide, deep, and slow moving. We came upon granite abutments on either side of the river and a couple of men fishing from one on the left hand side. The younger man (late teens/early twenties) identified himself as ‘Little John’, as his father and grandfather were also both named John. He told us of a dam directly ahead (locally identified as Bisco Falls) and showed us a portage access just downstream of the abutment to the left. His family owns the land and the dam. Little John gave us all the info we could ever ask for (very nice, talkative, young man) about the dam and the small hydro-electric power plant that his family runs and feeds back into the Central Maine Power electrical grid. The dam and falls are very picturesque. I asked about the possibility of photographing them in the future, but Little John was skeptical as his father is a ‘baby boomer and pretty set in his ways’.

Upon leaving the falls area, the river becomes narrower, yet still quick flowing with ripples and shallow spots. We enjoyed the wildlife here and it was very picturesque and isolated, even though we were only a few hundred yards from route 26. We saw multiple ducks, a blue heron, a kingfisher, a Canadian goose, and best of all…. a martin! In all my time in the Maine outdoors, I have only seen three of these beautiful, weasel like mammals.

Beyond the half way point, we began to come upon more and more downed trees blocking old river paths and diverting the river onto new courses. We approached a junction where the main river went left and a small tributary headed right. We took the left. The water became quicker flowing and I noticed a big log jam straight ahead, but saw that the water flow took a 90 degree right at the jam. Going around the corner the river became impassible at a massive log jam with the water flowing directly under at a pretty fast rate. Time to back pedal and get back up stream and try the right path. There were 5 guys at the log jam looking around drinking beer (mmmmm beer). One asked where we came from. “Upstream”, I replied. I thought it would be obvious ;-0. The right path brought us back to the main river channel with a couple of obstacles, but nothing too difficult.

From here the river widens, shallows, and slows, but it was still moving enough so we didn’t have to paddle hard to make good headway. As we approached the bridge on route 26 near the bowling alley, the river continued to widen until forward movement was undetectable and was more pond like. The river then flows under the bridge at the base of Paris Hill and continues behind the Market Square portion of town until it reaches the dam at routes 117/119. We pulled out at the small park to the right of the falls and called it a day. 7 +/- miles in a leisurely 4 1/2 hours. Great Day! 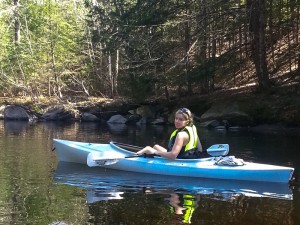